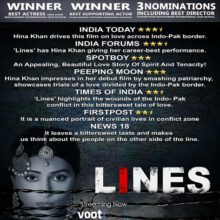 History is the witness of lines being created and drawn but it was not Sir Cyril Radcliffe, a British lawyer, who was commissioned to draw the borders that would divide British India into two countries – Muslim-majority Pakistan and Hindu-majority India but the emotion behind was Political curiosity, Weather Sir Muhammad Iqbal, Faiz Ahmed Faiz, Mirza Galib, Mathew Arnold, Alexander Pope wrote on Wars and partition, We remember Saadat Hasan Manto also whos illusion was pure of deep intellect that people realised late. Since then Art and its esthetics always have been part and parcel to glorify Love and emotions in different ways “Lines”  a Film is an emotional Modern Satirical Metaphysical Science of Tearjerkers to bring panorama and Eliminate Hatred, aridity and dejection the pure emotional Metaphor Discovered is Worth watch and you feel Flow of emotions that will bring you in Tears at the eleventh hour”.

Lines a film starring Hina Khan, Rishi Bhutani and veteran especially Farida Jalal has been the subject of several headlines all along. From the 1st look worldwide which was launched in Cannes 2019, Lines received a lot of public attention especially because of the famous debut of Hina Khan on Cannes Red Carpet which was covered by worldwide media platforms.

The film is streaming live on the premium app ‘ Voot Select ‘ as one of the few films from the country which was awarded internationally and appreciated nationwide.

The film has a very realistic yet unknown overview of the daily lives of the people who live on borderlines border lines. It beautifully shows how their life gets intertwined with the frequent losses because of the conflict.