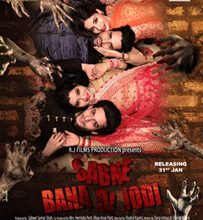 In Bollywood, the trend of keeping movie titles very differently is going on. “Sabne Bana Di Jodi” – a horror comedy family entertainer is one of such kind which is going to release soon. The trailer of the film was launched today at Sahara Star Hotel, Mumbai where the entire cast and crew of the film was present.

Presented by RJ Films Production, the film is directed by Shahid Kazmi, produced by  Sabeer Samar Shah and co-produced by  Mrs.Hemlata Pant and Vikas Arun Pant who is also the creative director of the film.

To add more twists and turns to this chaos, the  ancestral wedding house is haunted with the ghosts resembling exactly the family members. Now, it will be interesting to see how the families deal with the ghosts and make the wedding happen. This will probably be the first time that all the actors in the film are doing a double role.

The music of the film is given by Tuhin Biswas and Mukku and the singers are Raja Hassan, Kumar Sharma, Mukku and Pooja Giri. The D.O.P of the movie is Rahul Singla.

Dinesh Gurjar is production manager and Assistant director of the film.

The movie is set to release on 31st January 2020 through PVR.