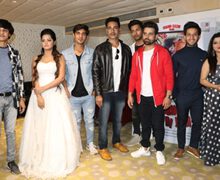 Asrani will be seen in the role of a ghost

In Bollywood, the trend of keeping movie titles very different is also going on. A film directed by Shahid Kazmi is going to release soon titled “Sabne Bana Di Jodi”. The grand trailer of the film was launched today at Sahara Star Hotel Mumbai where the film’s producer director as well as all the actors were present.

Film’s Producer Sabeer Samar Shah is also one of the actor in the movie. He is very excited to work with actors like Asrani Ji, Shagufta Ali and Mir Sarwar.

The film’s singers are Raja Hasan, Kumar Sharma and Pooja Giri while

Kiran Verma has given the music of the film.

The film is going to release on 31st January.

The story of this horror comedy film is that when all the people go to their grand parents house for an arranged marriage, it is revealed that the house has been haunted. The twist in the story comes when it is revealed that every person has a ghost of the same face. This will probably be the first time that all the actors in a film are doing a double role. Asrani ji is probably doing a horror comedy for the first time, he is playing the role of a Sardar of ghosts.

Mir Sarwar, who played an important role in films like Bajrangi Bhaijaan and Kesari, has played the role of a Sardar in this movie.