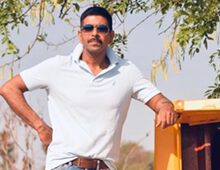 Who says our actors can’t pull off roles that require getting out of their comfort zone? Our actors playing most challenging roles to prove there acting skills. Being professionals, most actors put in a lot of hard work and dedication into their roles. However, there are few who go beyond and to extreme lengths just out of love for the craft. Actor Rohit Pathak has made a name for himself by being a thorough professional towards her craft even if it means going the extra mile. Like he has done in the past, reportedly he went through tough training for his role where he is playing main antagonist for Ram Gopal Verma Next Crime Thriller. We can say in a word this is Baap for all crime thriller.

If you have watched Tamil film Theeran Adhigaaram Ondru and Bakrid then you cannot forget Rohit Pathak’s Performance and his transformation. Both the movie’s was critically acclaimed and his character was praised a lot by the critics and the movie lovers. He has started shooting for Ram Gopal Varma for his next untitled Web Series.

Rohit Pathak said “It was very, very hard for me but I knew I had to prove myself as an actor. The preparation for this film was a painful process for me emotionally. I knew that for media and people to love my character, I prepped really hard. It was not easy because I am not this evil person. I used to go to my house and lock myself up in my house for hours and try and behave like antagonist, trying to find a body language, posture and demeanour. I was exhausted after this process because no one is a person should ever become like this”.