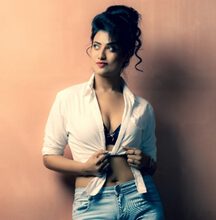 Known professionally as Ankita Thakur, is an Indian model hails from Kolkata. A Computer Science graduate and a software engineer by profession, she brought several laurels to the family with her contribution to athletics and games which she has been associated throughout her schooling period.

Being passionate and having inclination towards acting brought her to the new carrier in a new direction all together  where she is looking forward to explore her talent and acting skills.

Luckily, she has got a major breakthrough when Vikas Vashistha’s production house ‘Vsquare’ locked her for 5 music videos and 2 films.

Let’s hope she does find what she is looking for. However, she looked quite graceful, glamorous and promising while performing on the sets of her first music video ‘Drame Na De’ opposite Girish Nakod, Muhfaad and directed by Himanshu Tyagi.

“Ankita has a great potential. Her performance is very striking and shows a lot of promise. Her performance with actor can be well received by the audience. We look forward to creating more successful music videos and films under Vsquare banner. I wish her a grand success ahead, “said Vikas Vashistha, Producer of Vsquare, in a statement.