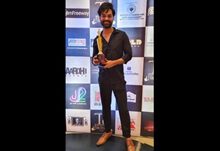 Yuvraaj Parshar said, “Mehroo is a tribute to Phulwama hero’s I’m so glad it was my first award as a director. I would like to share the award with my team as without them was not possible.”