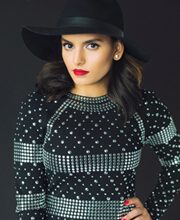 The young singer, song writer & influencer is already considered the voice of her generation.  Soothing voice blending with lyrics that seeped in like poetry adding substance is exactly what Shannon K’s every song resonates.

The young rising star is the daughter of famed Bollywood singer Kumar Sanu. As a child, Shannon’s ears were continuously filled with sweet melodies, inspiring her to attend The Royal School of London before studying with voice teacher and vocal coach Eric Vetro who has trained global stars like- Ariana Grandee, Jennifer Hudson, Shawn Mendes and Katy Perry amongst others.

A firm believer in the power of music , Shannon began her U.S. musical journey in 2018 with the release “A Long Time,” a song that was written and produced for Shannon K by 4X Grammy award winner Jason “Poo Bear” Boyd (Justin Bieber, DJ Khaled, Drake, Pink etc.). Her video “A Long Time” has garnered over 40 million views on YouTube and the numbers are growing.  The video was directed by Annabelle, in Los Angeles.

Recently, Poo Bear has co-written  a number of multi-platinum hits including “Where Are U Now”, “What Do You Mean,” for Justin Bieber, “Despacito,” for Luis Fonsi/Justin Bieber and “I don’t Care” for Ed Sheeran.

Shannon, has already made a name for herself in the US and got a lot of accolades for her anti-bullying song anthem – “Give me your hand”. The lyrics for “Give Me Your Hand” are based on Shannon’s personal issues over the years. Shannon collaborated on this song with Academy Award and Grammy nominated producer Kyle Townsend (Lady Gaga, Jessie J, Jennifer Hudson and “Stand Up For Something” by Andra Day written by Diane Warren.). The video for “Give Me Your Hand” features David Arquette, Ed Westwick, Freddie Smith, Briana Evigan, Antonio Del Rio, William Valdes, Chloe Noelle, Connor Dean, Mirjam Novak, Kelley Jakle, Shelby Young, Chrissie Fit, Manolo Gonzalez Vergara, Drew Van Acker, Ryan Pinkston, Molly Burnett, Taylor Spreitler, Kevin G Schmidt, Aubrey Miller, Lexi Dibenedetto and Ian Bohen.

Shannon has carved her name on the trophy of Hollywood Music In Media Awards for best social message original song . She has also collaborated with Bollywood singer Sonu Nigam on a fusion song titled OMT directed by Annabel and Bollywood singer Shaan for an upcoming song.

She made her Bollywood debut with the song ‘Tik Tok’ which was produced by Himesh Reshammiya for the movie Happy Hardy and Heer.   Shannon is certainly the perfect example of beauty meeting brains. At a young age, Shannon has already made a mark for herself not only in India but globally.

She is one of the very few artists who has glorified Indian soil on global platforms.