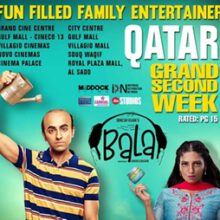 Dubai: It has been a week since the release of Ayushmann Khurrana’s  Bala is running successfully in the box-office. The movie continues in a good number of screens in the UAE and other GCC Countries with high occupancy. The film has been well received with positive reviews and praises have been showered upon the actor.

‘Bala’ is Ayushmann’s biggest release till date. The film released across 3000 screens in India and more than 550 screens in the overseas markets.

Indywood Distribution Network owns the distribution rights of the overseas market and is all set to release the movie in Saudi Arabia on 14th November.

Ayushmann Khurrana, who has given 6 consecutive hits, is coming back to the screen after a brief break with Bala. The actor will be joined by two of his phenomenal co-stars Bhumi Pednekar and YamiGautam.

Actors Seema Pahwa and Javed Jaffrey also play a pivotal role in the film. Bala attempts to take a satirical twist on a middle-aged man suffering from hair receding through slapstick comedy.

Bhumi will play his love interest in the film. Helmed by director Amar Kaushik, the movie is produced by Dinesh Vijan.