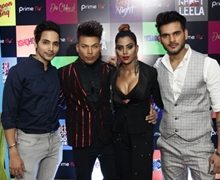 Prime flix logo was been unveiled by the Company Managing Director Rakesh Bhosle followed by the glimpses of web series going to be streaming on the OTT platfrom .

Prime flix has been developed in consideration with the change in preference  in content industry .  Audience have now started viewing content more digitally on smart phones than on LCD screens .

specially which is going to get streamed on prime flix OTT platfrom for subscribers.

Sushil Deshpandewhose the pillar of prime flix aims to build an empire of creative content  for Prime Flix & reach out to masses of Indian Audience by keeping economical packages for subscribes .

So that more and more audience can take the opportunity of viewing the content as per there choices.