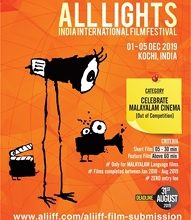 Ernakulam: All Lights India International Film Festival (ALIIFF) invites entries for ‘Celebrate Malayalam Cinema’. Entries for Feature Films and Short Films can be submitted for the Film Festival till 31st August, 2019.
The criteria for the film’s which had to be submitted is that the duration of Short Film should be between 5 minutes to 30 minutes and for Feature Film should be more than 60 minutes. The Films should be made between January 2018 to August 2019.

Film entry is free.
About All Lights India International Film Festival
All Lights India International Film Festival (ALIIFF) aims at providing a unique platform for global film industry to portray excellence in film making, aids to inspire, nurture and integrate the Indian Cinema industry thereby facilitating congregation of people and nations. The film festival provides a premier showcase for all aspects of filmmaking: the art, the filmmaker, talented directors and actors, and the film- lover in all of us. ALIIFF aims at educating the community & film festival attendees through the art and science of film, promoting cross-cultural awareness, the exchange of ideas, and social understanding.
For more details: 9539967373
Email : submissions@indywood.co.in