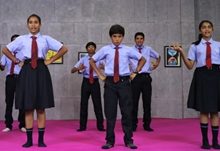 The Movie “UDD CHALE”, which got Censor Clearance is based on Holistic Education, where teachers pay attention towards Children’s Physical, Personal, Emotional, Spiritual well being as well as cognitive aspects of learning, it also based on the premise that each person find identity, meaning, and purpose in life through connections to the community, to the natural world, and to humanitarian values such as compassion and peace.

In this movie, The School is run by STUDENTS PARLIAMENT and each and every decision and even problems solved by Students Parliament, and Teachers are just Facilitators. This movie also has Wild Life Shoot, where Students stuck in Jungle in between Carnivores animals, like Lions and Leopards during Wild Life Exploration. The movie “UDD CHALE” is Produced by Takshraj Films and Directed by Anil Gajraj.

The Movie has just got cleared from Censor Board of Film certification with U/A certificate and Director Anil Gajraj said that all students should have freedom and choice to choose their interest of Field during school days. The Movie casts are Sanjay Gurbaxani, Banwarilal Jhol, Lajvanti Bhagtani, Poojan Joshi, Aakash Sippy, Dhrudip Thakkar, Agust Aanand, Binod Singh and Takshshil. Main lead Child Actors are Raunak and Khushi Singh. PadamShree Awardee Shri Kanubhai also did Guest Appearance. Music by Santosh Puri and D.O.P is Jayanta Ghosh. Director and Producer Anil Gajraj is planning to Release “UDD CHALE” movie on Independence Day, 15th August 2019, all over India.