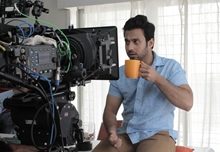 A Production of Xpression Films
Directed by Debutant Director Amit Agarwal
Produced by Charu Sumit Garg & Amit Agarwal
Distributed by Venus Worldwide Entertainment Pvt Ltd
Venus is releasing the Film in Cinemas on 21st June 2019.
“For me, the director’s job is to manage the sensibility of a film’s story and it’s characters through all the departments of the filmmaking” says debutant filmmaker Amit Agarwal who is all set to release his film “FASTEY FASAATEY”.
He says it took him nine months to develop & lock the script & one year to complete the pre-production, shooting and the post-production of the film.
Drafts were re written to perfect the script, post many readings, script doctoring & modifications, we finalised the script in 9 months”.
“However post locking the script we started casting, pre-production, shooting & it took me one year to see the final finished film with all the post-production done. Of course it was a challenge but we managed, there are no excuse when you want to tell a story, now I am looking forward to the response from the audience”adds Amit Agarwal.