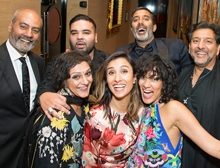 London to host biggest Gala award night (ACTA) Eastern Eye’s Arts Culture & Theatre Awards which recognise British Asian talent in a wide range of disciplines, including literature, film, television, theatre, comedy, music, dance, visual arts and contribution to the creative industries in general.
This year winners include George Alagiah, Naughty Boy, Meera Syal, Anita Rani and Anoushka Shankar.
Now in its fourth year, the ACTAs are the leading event recognising the enormous contribution that artists of South Asian heritage have made and continue to make to the Britain’s thriving arts scene. The ceremony pays tribute to Britain’s best and most creative talent across a wide range of disciplines, including literature, film, television, theatre, poetry, music, photography, dance and the visual arts. Celibrity guests from the arts, cinema, TV and creative industries to attend the gala ceremony.

The awards are hosted by Eastern Eye, part of Asian Media Group, Britain’s biggest Asian publishing house with a stable of market-leading consumer and business titles serving the Asian community in the UK and USA. We have over 51 years’ experience in publishing for the Asian community and also host leading events, from black-tie award dinners to seminars, conferences and round table discussions.

ACTA has evolved and grown since it was launched in 2016. It appears to have touched a chord certainly in the Asian community but in the last three years it has gone beyond that. For one thing, ACTA has not been narrow in its vision. ACTA encourages diversity and has been pleased to note the advances made by such TV programmes as McMafia, Doctor Who and Mrs Wilson. These advances have not been to the taste of some commentators on national newspapers which indicates that the attempts to achieve diversity are still very much work in progress.
It is not the mission of ACTA merely to heap laurels on those who are already well known and part of the mainstream. Through its week to week newspaper coverage and through ACTA, Eastern Eye is always striving to discover fresh talent. Those who win an ACTA or are shortlisted for an award usually find it a little easier to make it in the mainstream.
There was a time when the first generation of immigrants from India, Pakistan and elsewhere thought the arts were for other people. With successive generations that view has changed although in some quarters people are still intimidated from going into the arts – or even going to see a play or an exhibition. Britain is extraordinarily rich in the creative industries which are worth £92bn a year – and it has to be emphasised that the arts are for everyone. ACTA is a step in trying to achieve that goal. Eastern Eye aims through ACTA to give British Asian artists it full support.

For further details about the 2019 ACTAs and categories please visit www.actas.co.uk and follow us on Twitter. Our 2019 independent panel of judges can be viewed here.