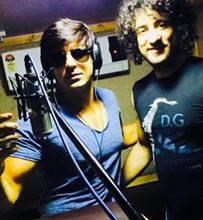 Sahil Multy Khan is an Indian Bollywood music composer from Baramulla Kashmir who is presently based out of Mumbai.

Having completed his education in Baramulla Kashmir, Sahil moved to Mumbai to pursue a career in Bollywood and taken formal music training from music guru Shri Santosh Pandit During his stay in Mumbai earlier, he began composing ad jingles music albums etc.

Sahil got his first  Bollywood break to composed all songs of movie  “Dhara 302” and it’s  songs had been  launched by ZEE music.

Sahil a created the title song for IFEFA in Australia in 2014 Dec. He was featured on various news channels for his music for the IFEFA event.

His title song has been awarded by IFEFA-2014 in Australia

Sahil Multy also composed one music video in US which was released in Hollywood and bollywood both.

His  composed another music Video which was released in Muscut

After success of Dhara 302 music he also signed as an actor in short Film “Who Dies” directed by Rufi Khan. The movie was awarded by various platform National & international  both.

Recently Sahil Multy Khan composed Kashmiri Song based on Mother. It was released on YouTube on 12th May 2019. it was featured in various Kashmiri TV channel.

Recently he signed as music composer for Bollywood Movie “Kashmir Dhara 370” based on Kashmir background directed by Mr Rakesh swant. Music dubbing is going on. All songs are sang by Bollywood leading singers.  Movie will release shortly.

He has  visited Sydney Australia with honorable prime minister Shri Narendra Modi ji in 2014 and I got a opportunity to sing a song for our  country India.