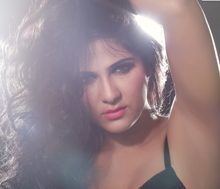 World Cup is approaching and the entire country is gearing for it. Summer break and World Cup matches has been a perfect combination. Global artist, singer Shivangi Sharma known for completing more than 500 shows around the globe, having associated with brands like Sony, ICICI, Reliance, Lenovo, Axis to name a few has added a new feather to her cap. The singer is the first Indian artist to compose a song on World Cup.

Speaking about the same Shivangi said, “I was travelling to US last year when this song came in my mind when I was in the flight. And then I sat along with my friend Nikhil who is a co-composer. The song was ready and along Vikkas Sharma who directed my previous videos we developed a concept for the shoot.”

This project with will the debut of Shivangi’s own production house, S R Productions, co-owned by her friend Rashee. Expressing about the same Sharma added, “It’s the first project of S R Productions and I am super excited about it. We have a huge list of songs that we want to make. Our next will be something revolving around women as I am a firm believer of Women empowerment.”