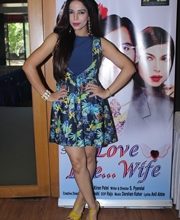 The modern era is again seeing transformation in the interest of audience towards watching more and more short films.

Roughly between 1920s till 1970s – short films were generally termed as short subjects when confined to two 35mm reels or less, for a film of three or four reels. But the modern era has broken all the barriers and boomed the internet market – therefore these days we see audience inclined towards more creative content on OTT platforms with more flexible options and quality outcome. And that is the reason why investors and producers are getting launched with fulfilling their dreams of filmmaking.

Recently, producer Kiran Patel from his Adorned Affairs Entertainment production did the Mahurat launch of his upcoming short film – ‘Love Life…Wife’. While interacting with media he shared that he is quiet confident taking the subject and his team. Director S. Pyarelal said that Kiran being physically challenged how he is inspiring everyone which is quiet motivating to the whole team.