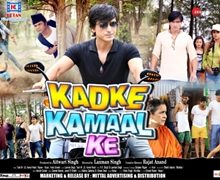 Rajat Anand is the Creative Director and the film which is lavishly produce under the banner of  Ketan Films International  is being released and marketing by Rajesh Mittal.

Kadke Kamal Ke Hindi Film releasing On 24th May 2019 All Over India. This entertaining film with lot of  masala for audience  is produced by Aitwari Singh, Directed by Laxman Singh, Creative Director Rajat Anand. Music Had been released by Zee Music Co.

A comedy film with Rajpal Yadav (Mama) and Aryan Adhikari (Bhanja) are notorious partners who wants to be millionaires but don’t want to work hard for it. They are trouble makers & honest.
This movie is a humorous story of 2 such lethargic, day dreamers.

Film is being released by Mittal Advertising & Distribution all over India.