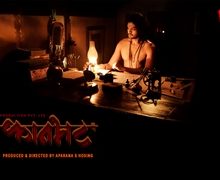 Filmmaker Aparana S Hosing took the social media on Wednesday to release first look poster of his film ‘Kaanbhatt’. The poster of Kaanbhatt had a surprise element as the lead actor Bhavya Shinde stunned everyone with his look.

Acclaimed Producer Aparana S Hosing, who has been working in Bollywood from last 9 years and was the Producer for films like ‘Jeena Hai Toh Thok Daal’, ‘Uttpattang’ and ‘Dassehra’ (Staring Neil Nitin Mukesh), will be debuting as a director with this Marathi movie. Mrs. Hosing says, “The Marathi cinema is setting new benchmarks. This film talks and portrays a story of a young boy about his dream and desire but destiny has something else for him for which he went on a different path. The story depict relationship between Ved and Science. This is style of film”.

The film is all set to release in theatres in 2019. The film shot at Bhor Rajwada, Mumbai and Uttrakhand. The beautiful music done by Rahul Ranade, lyrics by Guru Thakur. Film DOP is Arun Varma.