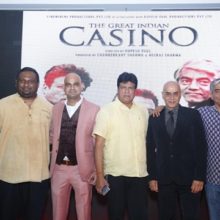 Sharma who did the most shocking interviews with big stars in his journalistic career is not new to the B- Town. His wife Neeraj Sharma is heading the production house based in Delhi.

The movie is already stirring controversy as it is  based on the impacts of Narendra Modi’s demonetisation policy. The story revolves around four crooks who uses Indian ‘jugad’ to tackle the ‘notebandi’. The movie is also dedicated to the ‘unknown number of people who died and five million people who lost job’ after demonetisation.

The teaser was launched by actor Dharmendra at Hotel Piccadily, New Delhi on Friday. “The movie is a mix genre of political and neo noir. It tells a very realistic story of how some smart citizens who took demonetisation as a boon when another one billion people had suffered it ” says producer Chanderkant Sharma