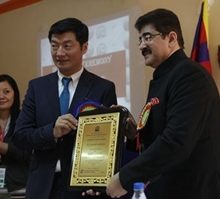 10th March 1991 was the D Day when the first professional film studio of north India was inaugurated and large number of film personalities were present there to give their best wishes to this new venture of India. Marwah Studios has been the promoter of Noida Film City.

In a span of 28 years of film, television and media business Marwah Studios has churned out 4500 television programs for more than 50 channels, has been associated with more than 150 feature films in 8 different languages, around 5000 training films has been produced from this campus.

Marwah Films And Video Production has produced around 2500 short films and given opportunity to more than 10,000 filmmakers from more than 100 countries of the World.

Marwah studio is the promoter of 100 film, television, media, art and cultural organizations and has reached 145 countries of the World. The studio has alone attracted largest number of celebrities and around 1.2 million people to Noida Film City under Film Tourism.

“I am thankful to each and every one who all have supported me, Mohit Marwah and Akshay Marwah and our ventures from all over the World in all these 28 years of business. We will leave no stone unturned to make Noida Film City the most happening place in the World,” said Dr. Sandeep Marwah President of Marwah Studios.